When I started running seriously again at the end of 2014 and started training for my first ultramarathon, I picked up a new pair of running shoes and as these were just about worn out I decided it was time to look around for some new ones.  Read on to see the result!

I went shoe shopping over the weekend and this is what I came back with: 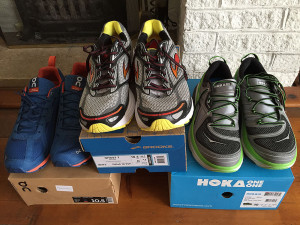 I have been wearing On Cloudrunner

shoes for the last 13 weeks of training and even though this was a total of only 350 miles they were showing some significant wear and I was beginning to feel the effects of this.  I was also concerned that the rather unique sole pattern was started to weaken in one particular place under the soles of my feet. 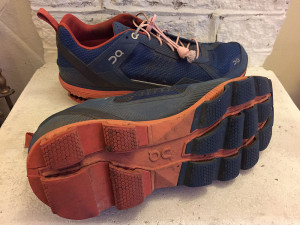 I really like this shoe and am a bit disappointed they haven’t lasted longer.  I was also having an issue with getting minor blisters on the end of my third toe when running more than about six miles in one go.  I decided to try a half size bigger and will see if this removes the blister problem without affecting the fit.  I purchased the On Cloudrunner

from one of my local running shops – Alton Sports in Farnham.

Since I started reading about ultramarathons and started training to run one myself I have been hearing a lot about HOKA shoes.  While the trend in distance running in recent years has been towards minimalist shoes, HOKA has taken an opposite approach and sought to introduce as much cushioning as possible.  HOKA shoes seem to be like Marmite, with some ultrarunners loving them and others just thinking they look ridiculous!

running shoe the most.

Although I went to Run and Become with the intention of buying some HOKA shoes, the staff were very thorough in seeking to find the best fitting shoe for me and they encouraged me to try on lots of different shoes from several manufacturers.  The very first pair I tried were these Brooks Mens Ghost 7

shoes and they just felt really comfortable from the first step I ran in them.

My plan is to rotate these three pairs of shoes during my runs over the next few weeks to see which suits me best and how they perform on different surfaces. Hopefully this will help me find one shoe to go forward with after that.

I do think that rotating shoes could have other benefits too, including forcing the body to use more muscles as each shoe “rides” slightly differently.  I know that when training for an ultramarathon running shoes are probably the most important piece of equipment a runner can have.

I will write reviews on each shoe once I have done a reasonable amount of mileage in each.

My shopping this weekend wasn’t limited to just shoes! I bought a number of other running related items, including a new GPS watch, which I will write about in another post soon.