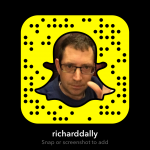 I joined Snapchat soon after it first launched, mainly just to reserve my ID before my name (richarddally) was taken by someone else.  I have watched from the sidelines over the last couple of years as its popularity grew but really did not see what business value it might have.  Another issue was that the user interface is far from intuitive and I never felt comfortable navigating through the app.  I would follow people but then never see anything they published!

I basically put Snapchat aside and went back to focusing on Twitter and Facebook for my DJ marketing and engagement.  That was until a couple of months ago when I started to see a number of well known figures in the podcasting world starting to get excited about the potential of Snapchat for marketing their businesses.  Online DJing and podcasting have much in common and this has encouraged me to look again at Snapchat.

It is the Story function that seems to have taken off as a way of engaging with your followers on Snapchat.  By allowing you to create a montage of Snaps you can create a “story” of your day or of an event.  Your followers can view this montage as many times as they like within a 24 hour period before the Snaps that make up the story are deleted.

Why has Snapchat become so popular?

I believe a key reason Snapchat has quickly grown in popularity for marketing is that smart people have recognised that Snapchat users tend to be very engaged.  Users are watching most if not all of the stories posted by those they follow – at a much higher rate than you could hope to get on Twitter or Facebook.

So how could this help you market either yourself as a DJ / Radio Presenter or even your online Radio Station?  How about posting a story following you as you travel to and prepare for a gig or show?  Or perhaps making regular behind-the-scenes stories about the operation of your station or promoting shows in advance.

If you are out and about at events or gigs you could have your Snapcode image on your business cards and posters, or even stickers, and encourage people to get out their phones and scan your Snapcode in Snapchat.

Getting started on Snapchat

The first thing to do is to really understand how Snapchat works.  I suggest watching some YouTube videos to help you understand the interface as it can be a little disorientating at first.

There are many good videos about Snapchat but I recommend this one from Cliff Ravenscraft: http://podcastanswerman.com/snapchat/

Once you are comfortable with how Snapchat works you should plan a strategy for using the application.  Think about how you often you want to share your stories, how long you want them to be and what you will include.  Most DJs and podcasters using Snapchat for marketing and promotion are creating daily stories and they are not using every story to “sell”.  Don’t forget to promote your use of Snapchat on your other social media platforms.

This is a list of some of the people I follow who are using Snapchat in innovative ways to promote their businesses and engage with their audiences:

Snapchat started out as a simple photo and video sharing app but has now become a powerful marketing tool that DJs, Radio Presenters and Online Radio Stations cannot ignore.  I plan to spend more time understanding what Snapchat can do for my DJing and I encourage you to do the same.  Do let me know how you get on.  If you follow me on Snapchat (richarddally) I promise to follow you back!