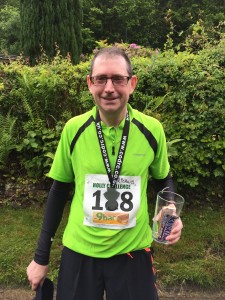 The Holly Challenge is held twice each year and offers a choice of running either a full marathon or a half marathon around undulating country lanes near Telford. I entered the summer edition of the race which took place on the 13th June 2015 and took on the half-marathon distance.

The two races start at the same time and are run over a multi-lap course of 0.84 miles.   There are two hills on each lap and the road surface varies from good tarmac to gravel and muddy farm track. The weather for the few days before the race had been bad and it was raining before and during the race. This meant there were many puddles and slippery patches as well as one part of the course being totally flooded. There was no way to avoid running through the flooded part which meant having wet feet for the entire races!

This is a small, very friendly event which starts and finishes outside the organisers house. The runners were of all standards and everyone seemed to be enjoying it despite the weather!

My training had been going well and I had added this event to my programme as a hard workout before my 30km race in a couple of weeks. I started out reasonably hard and then eased off a little as the event went on and the rain didn’t ease off. The hills felt increasingly hard in the second half of the race but once I knew I was leading the half-marathon I did my best to keep up a good pace.

I would recommend this event to anyone looking for a low-key but well organised half or full marathon. The short laps mean that drinks etc. are available as often as you want them and there is plenty of support.

I finished first, in a time of 1:57:38, just over two minutes ahead of the second place finisher. Although this might seem like a slow time, the nature of the course and the weather definitely made a difference and I was just happy to run under two hours. The win was a definite bonus.

The full results can be found here: http://www.webscorer.com/race?raceid=44777